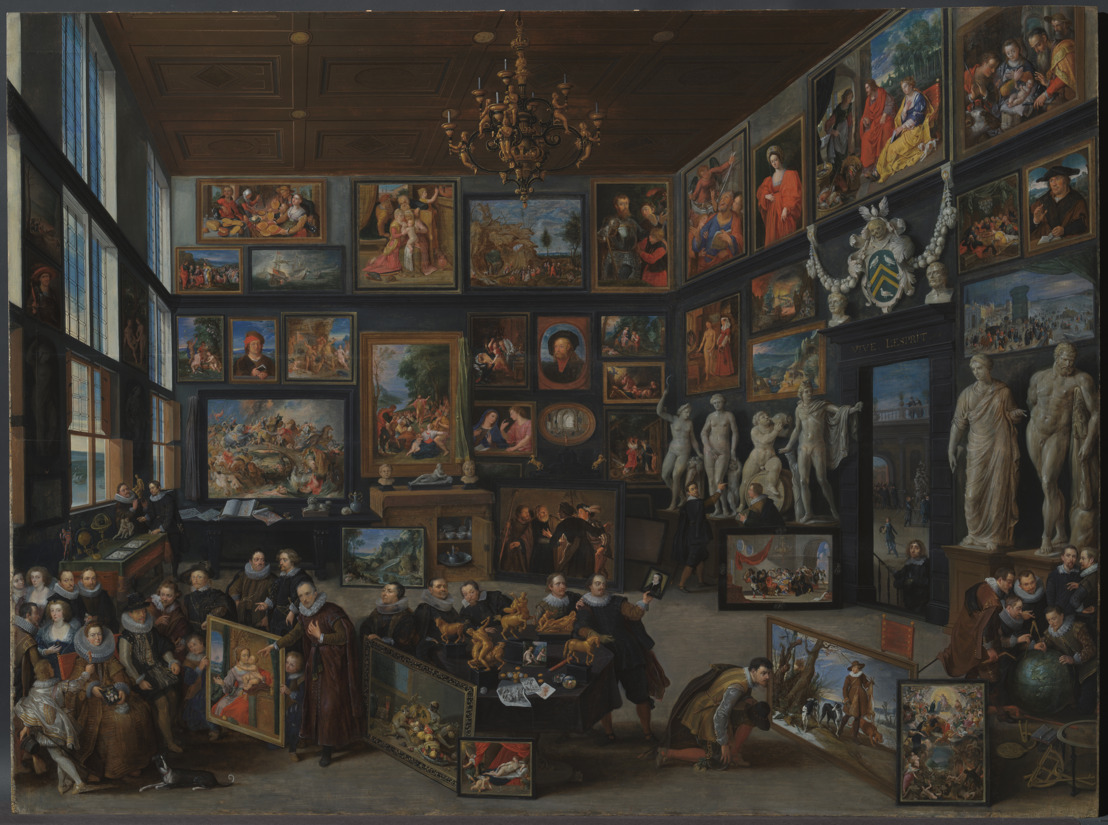 Following its restoration, ‘The Gallery of Cornelis van der Geest’ has returned to the Rubens House in Antwerp. The original paint layer has been exposed again, revealing details that have remained hidden for many years. The wood cradle proved to be the greatest challenge for the restoration team, however. For centuries, high tensile forces in the wood caused repeated damage. A tailor-made secondary support was developed, drawing on an innovative technique from the aviation industry. The return of ‘The Gallery of Cornelis van der Geest’ also marks the start of the last weeks of Ben van Beneden’s tenure as the director of the Rubens House. He retires in September.

The Gallery of Cornelis van der Geest is one of several masterpieces in the collection of the Rubens House. William van Haecht’s painting is included in the Flemish List of Masterpieces and the CODART Canon, a list of the 100 most important works of art from the Netherlands and Flanders (1350-1750).

In 2009, the Rubens House developed an exhibition centring on this painting and the unique genre of the painted art galleries, titled Kamers vol Kunst/Rooms full of Art. The Gallery of Cornelis van der Geest was restored for the occasion. At the time, the emphasis was on the paint layer and the frame. A climate box was applied around the painting to increase the painted panel’s stability.

Despite all these measures, craquelures (crack patterns), cracks and tenting reappeared in various places ten years later. The restraint of the cradle proved to be a problem. The oak panel is formed by seven horizontal boards and one vertical board, which swell and shrink in opposite directions. This complex structure causes tensile stresses in the panel, resulting in cracks.

Analysis during the restoration indicated that the panel’s central join must have failed as early as the 18th century. In the 19th and 20th centuries, several attempts were made to stabilise the panel. Unfortunately, these interventions only accelerated the painting’s further deterioration. Circa 1850, a non-flexible wood lattice or ‘parquet’ was applied to the back of the panel. The structure impeded the natural swelling and shrinking of the boards, causing even more cracks to form, in combination with temperature and humidity fluctuations. In 1970, the parquet was replaced with wooden clamps, which also provided insufficient support and blocked the damaged panel’s movement, causing visible damage to the paint layer.

It therefore became clear that a durable solution was needed, which took the panel’s movement into account. On 1 April 2019, William van Haecht’s masterpiece left for the Royal Institute for Cultural Heritage (KIK-IRPA) in Brussels for analysis and restoration by panel expert Aline Genbrugge. As a result of its Flemish Masterpiece status, the painting received subsidies from the Flemish Community.

The KIK-IRPA started by subjecting the painting to an extensive examination to understand how it was created and map its physical history. The multidisciplinary investigation – including visual analysis, imaging (UV, IR, RX scans), laboratory analyses and chemical imaging (ma-xrf scan) – revealed that the panel was altered, with two boards added during its execution, around the time of signing phase. The inscription was altered at the same time. The imaging reveals that almost every individual smaller painting was painted on a mise-au-carreau, a grid used to square off an image. The researchers were also able to identify the vanishing point in the gallery. The invisible perspective lines direct the observer’s gaze towards Rubens’s The Battle of the Amazons, a composition that Rubens probably painted in 1615 for van der Geest (currently on display in the Alte Pinakothek in Munich).

During the first phase, the painting was stripped of any later additions. The paint layer was carefully cleaned, revealing the original, fresh colours. All later additions and restorations were removed step by step: the slats around the panel, the wooden blocks (clamps) and a thick layer of wax on the back of the painting. The cracks and joins were also cleaned. The original paint layer was even revealed under some old inpainting. The original colour of the eyes of Willem van Haecht (who is presumably standing in the door opening) was thus restored. After cleaning, the cracks and joins were glued and filled with small pieces of softwood, to avoid additional pressure from being applied to the oak boards.

The structural support of the panel, which had to facilitate controlled movement of the wooden boards, proved to be the main challenge during the restoration process. To this end, restorer Aline Genbrugge designed a flexible secondary support with tapped battens, drawing inspiration from the aviation industry. This pioneering system was developed at the Hamilton Kerr Institute (which is associated with the Fitzwilliam Museum ) and the University and Cambridge and is designed to provide optimal flexibility. This tailor-made support is made of Sitka spruce battens. As a result of its high elasticity, this wood is extremely suited for absorbing the panel’s movement, without blocking it. Finally, the paint layer was restored and a new varnish layer applied. The painting’s support and paint layer have both been stabilised again. A flexible framing system, also made of Sitka spruce, facilitates maximum movement. The climate box, which has been incorporated in the frame, protects the panel against temperature and humidity fluctuations. A wireless logger monitors the climate in the box.

Following all these durable conservation measures, this Flemish and international masterpiece in the collection of the Rubens House has once again been stabilised, both at the level of the cradle and the paint layer. The flexible support, in combination with the climate box, ensures that this panel and its complex structure can withstand the test of time. The return of The Gallery of Cornelis van der Geest also marks the start of the last weeks of Ben van Beneden’s tenure as director of the Rubens House. He will be retiring in September.