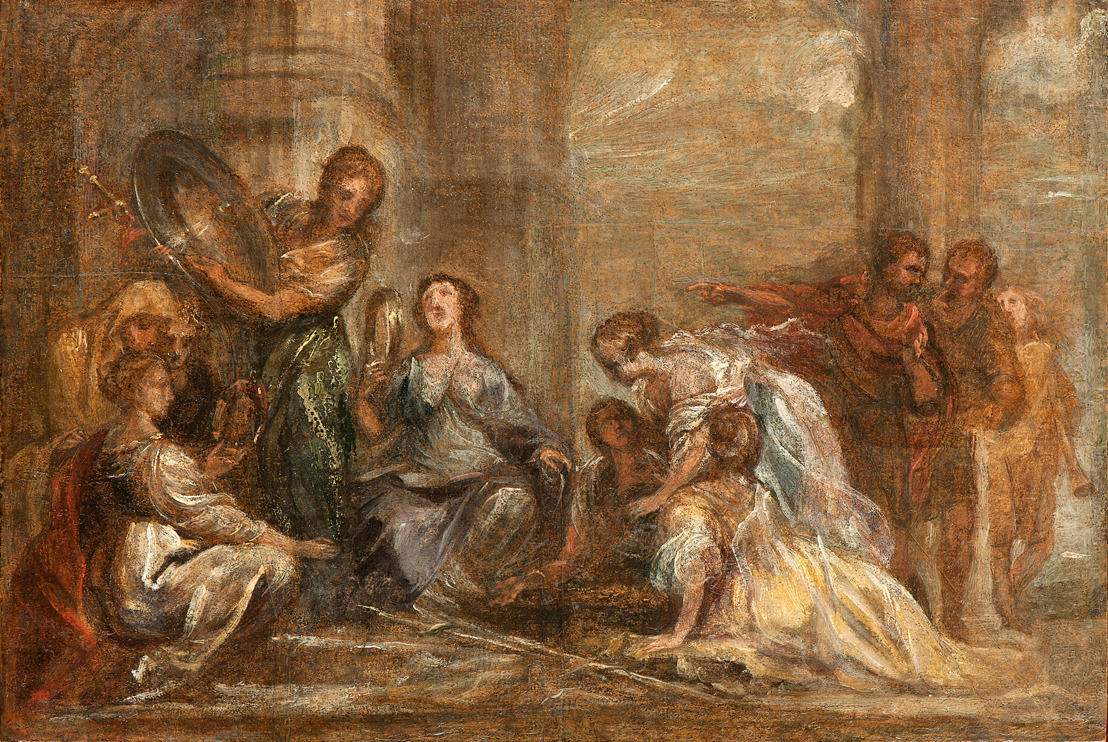 The Rubens House celebrates its birthday in style with a new acquisition of an oil sketch by Jan Boeckhorst (1604-1668). Boeckhorst, a student of Rubens and a famous master in the 17th and 18th century, was neglected for a while. It was only in the 1960s when art historians rediscovered this Antwerp master. Apart from religious subjects, Boeckhorst painted a lot of profane scenes, such as the monumental painting ‘Farmers on their way to the market’, which is shown in the big studio of the Rubens House. The museum also acquired a second painting of Boeckhorst: ‘Achilles and the daughters of Lycomedes’. The oil sketch is a beautiful example of Boeckhorst’s style, which emphasizes prominent figures. By adding architectural elements, air and secondary characters, the contours of the figures are highlighted. Boeckhorst painted faces and details with a only a few strokes, and introduced light beams by adding small white paper strips. The sketch is a modello for the final painting in Schleißheim with Achilles and the daughters of Lycomedes. Achilles and the daughters of Lycomedes was a popular theme in the fine arts and was highlighted by various masters, such as Rubens and Erasmus Quellinus. The audience can check this modello out from the 28th of June 2016 onwards.

The Rubens House regularly receives ‘brilliant visit’. Thanks to its good connections with collectors and traders, the museum regularly is the world’s first to exhibit some extraordinary masterpieces. This summer, two recently discovered beautiful portraits of Anthony van Dyck will sparkle in the Rubens House. The museum invites its visitors to free tours and introduces the audience to some spectacular loans, apart from the paintings of the permanent collection. The ‘hidden Van Dyck’, which was discovered during an English TV show and recently got back from an exhibition in New York, will once again be given a place of honour in the big studio. Thanks to a loaned copy of a found self-portrait of Van Dyck, the museum now exceptionally hosts three self-portraits. The number of people for a tour is limited, so be quick to reserve your ticket!

For the people who want to discover Antwerp in the footsteps of Rubens this summer, there’s an extra treat. On the website of the museum, visitors can find three routes, which lead them through the city during two or three days. These routes show the most beautiful strolls, museums and markets of Antwerp, with practical tips to save costs. It’s a lovely mix of what Antwerp has to offer these days.

From an artist’s residence to a museum, through jail

When Rubens decided to make Antwerp his home in 1610, he bought a house with land at de Wapper. The existing Flemish house became the residence of the Rubens family. The master built his studio in Italian style, which he thoroughly studied during his stays in Rome, Venice, Genoa and Mantua.

Peter Paul Rubens lived at de Wapper for 30 years. After his death, Helena Fourment, Ruben’s wife, rented the house to the Cavendish couple, who had a popular horse riding school. When the Cavendish family moved out, the house of the master was sold. The most peculiar inhabitants of Ruben’s house probably were the clergymen locked up by the French rulers, who used the house as a prison.

By the end of the 19th century, the city of Antwerp had the idea to buy the Rubens House and open it to visitors. The house became property of the city only in 1937, after frantic attempts at acquisition and expropriation. Led by the architect Emiel van Averbeke, plans were developed to restore the house to its original state, after centuries of adaptations and renovations.

Since the written and iconographical sources contradicted each other, van Averbeke based the restoration of the building on the traces of construction. After a delay in the restoration works during the second World War, the Rubens House welcomed its first visitors in 1946.