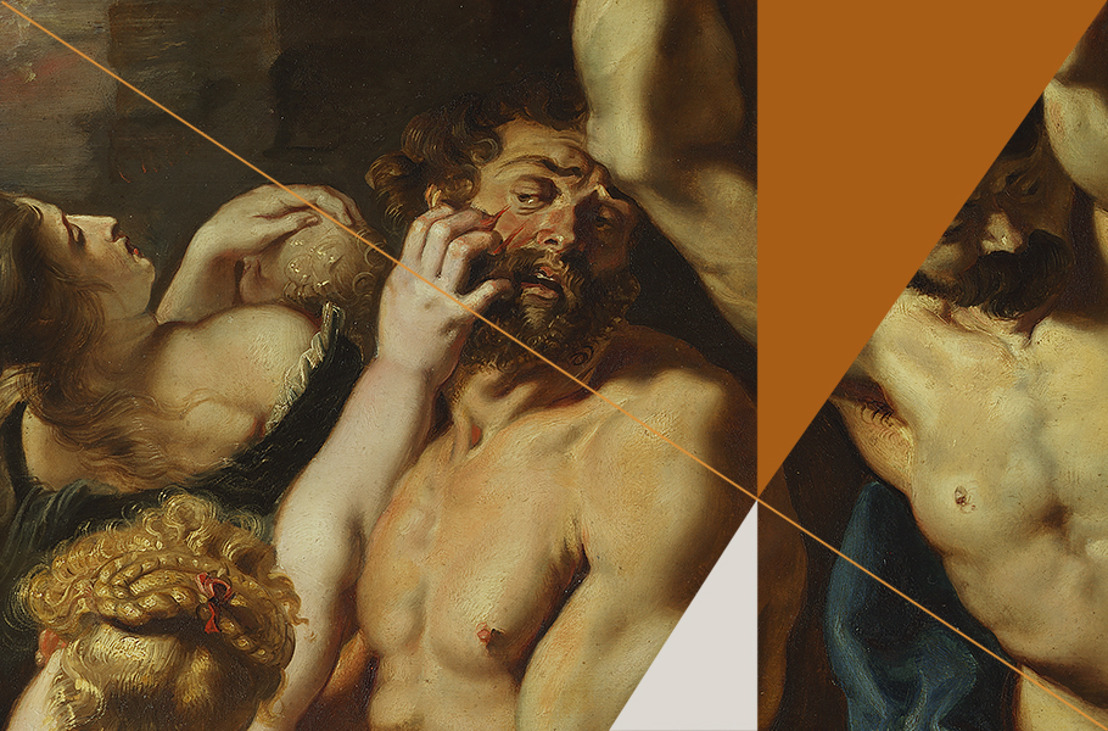 Rubens’ monumental Massacre of the Innocents – one of The Art Gallery of Ontario’s most outstanding exhibits – has temporarily returned home. The painting is an early work by Rubens and swiftly entered a succession of prestigious collections. Having been wrongly attributed to a variety of masters since the eighteenth century, experts clearly identified Rubens’ hand in the Baroque formal idiom in 2001. The discovery of a Rubens previously believed lost was international news and the work was put up for sale. It was auctioned at Sotheby’s in London in 2002 for the record amount of £ 49.5 million – the highest price at that point to be paid for an old master. The Massacre of the Innocents was purchased by the Canadian businessman and collector Ken Thomson, who donated it to The Art Gallery of Ontario in Toronto. The painting has not travelled since 2008 and is still the most expensive ever painting by Rubens.

The work presents a scene from the Bible. Following the Nativity of Jesus, King Herod learns that a new king has been born in Bethlehem and, fearing for his power, he orders the killing of all boys aged two or younger. To spare their child this horrific fate, Jesus’ parents flee to Egypt with the infant. The ‘Massacre of the Innocents’ was a popular theme in painting. It was depicted especially frequently during the Renaissance, when artists developed a fascination for Antiquity.

References to Antiquity and the Renaissance

Rubens painted his version of the episode around 1610; shortly after returning from Italy. The work is packed with drama and violence, while the numerous allusions to Antiquity and the Italian Renaissance enabled the young artist to present his credentials as an accomplished pictor doctus. He took inspiration for the crouching mother, for instance, from the antique nude Venus in the Gonzaga family collection in Mantua, where he had been able to study it as court painter. The soldier in the centre of the composition, meanwhile, who is about to stab an old woman with his sword, is borrowed from The Wrestlers, a sculpture Rubens saw at the Villa Medici in Rome. His comrade, whose eyes are clawed at by the semi-nude young woman, is based in turn on the celebrated Laocoön group, which Rubens sketched in 1602 during his visit to the papal collections in the Vatican. The deathly pale corpses of the murdered children strongly resemble the marble sculpture of three sleeping putti that Rubens saw at the Villa Borghese in Rome. References to the Italian Renaissance are also clearly visible: Rubens drew on the figure of Christ in Michelangelo’s Resurrection, for example, for the soldier on the right who is about to dash a child against the stonework. However, unlike Michelangelo’s Christ, who conquers death, Rubens’ soldier is its cause. The most famous and certainly the most widespread representation of the Massacre of the Innocents was probably Marcantonio Raimondi’s engraving after a design by Raphael. Compared with the latter’s graceful composition, Rubens’ interpretation is more powerful, true to life, and hence considerably more gruesome. Rubens also appears to have looked at examples in Antwerp: the diagonal composition of the architecture in the background, for instance, shows similarities with a composition by the Antwerp master Frans Floris.

Courtesy of the King Baudouin Foundation, the Rubens House is also showing an early work by Anthony van Dyck, representing the Apostle Matthew as a powerful yet contemplative male figure. The panel, part of a series of Apostle paintings, was recently acquired by the King Baudouin Foundation through a bequest and is the only Van Dyck Apostle still in Belgium. Having funded the restoration of this deftly executed Apostle’s head at the Royal Institute for Cultural Heritage (KIK-IRPA) in Brussels, the Foundation has now placed it on permanent loan at the Rubens House. The action firmly reflects its mission to preserve, protect and valorize important works from the nation’s cultural heritage and to make them accessible to the public.

Van Dyck shows Matthew holding a halberd, the weapon with which the Apostle was martyred. He has modelled the figure with fluid brushwork that creates an even painted surface in which only the occasional stroke can be made out clearly, most notably in the hair in the cloak. He then applied the highlights with broad and exceptionally thick strokes – an impasto that is readily visible in the Apostle’s hand and face. The most striking examples, however, are the thick streaks of white paint on Matthew’s white shirt and along his halberd.

The young Van Dyck might have drawn the immediate inspiration for his Apostles from Rubens, who had already painted an Apostle series for the Duke of Lerma around 1610. Van Dyck must have seen these examples in his mentor’s studio. It is thought that he painted his own series with Christ and the Apostles between 1618 and 1620: the style is in keeping with his works from his so-called first Antwerp period.

The King Baudouin Foundation’s Apostle Matthew is part of the ‘Böhler series’, named for the German art dealer Julius Böhler, who acquired it from an Italian private collection in around 1914. Böhler then sold the series on to various private individuals and museums. The Matthew composition is the only example of a Van Dyck Apostle in Belgium. Eight of the thirteen compositions in the series have survived, some of which are privately owned.

This latest permanent loan is the seventh occasion on which the King Baudouin Foundation has enriched the Rubens House collection. Previous loans of this kind include the decorative silver jug and dish by Theodoor Rogiers, Lucas Faydherbe’s Hercules, the De Ganay manuscript to Peter Paul Rubens and two paintings by Jacob Jordaens. They underline the Foundation’s mission to preserve and protect our heritage and make it accessible to the general public. In the case of the Van Dyck panel, this protection is two-fold: not only did the Foundation purchase the work, it has also funded its analysis and much-needed restoration at the Royal Institute for Cultural Heritage (KIK-IRPA) in Brussels.

The first step at KIK-IRPA was to clean the panel, following which the yellowed varnish layer and areas of overpainting were removed. Cracks were repaired and losses in the paint layer filled. Technical examination confirmed something that can also be seen with the naked eye: Van Dyck did not paint the vertical strip on the left. Not only this work, but all those making up the Böhler series have been enlarged in the past. The main problem that needed to be addressed, however, was the panel’s wooden support, which has suffered woodworm damage. The old cradle had to be removed and replaced with a new system, to which end the wafer-thin panel was given a secondary flexibly attached support. This revolutionary restoration technique is based on a mathematical formula that provides exactly the necessary support without interfering with the panel’s natural expansion and shrinkage. The cradle on the rear is now a movable wooden slatted construction that functions as a flexible back, giving the panel greater freedom of movement. It is constructed from Sitka spruce – a type of wood with high elasticity that is also used in the aviation sector. The restorer Aline Genbrugge learned the technique from its developers, Simon Bobak and Ray Marchant, in London. This is the first time the method has been used in Belgium.

More information for the press on https://stadantwerpen.prezly.com/en#

The Massacre of the Innocents: most expensive Rubens ever