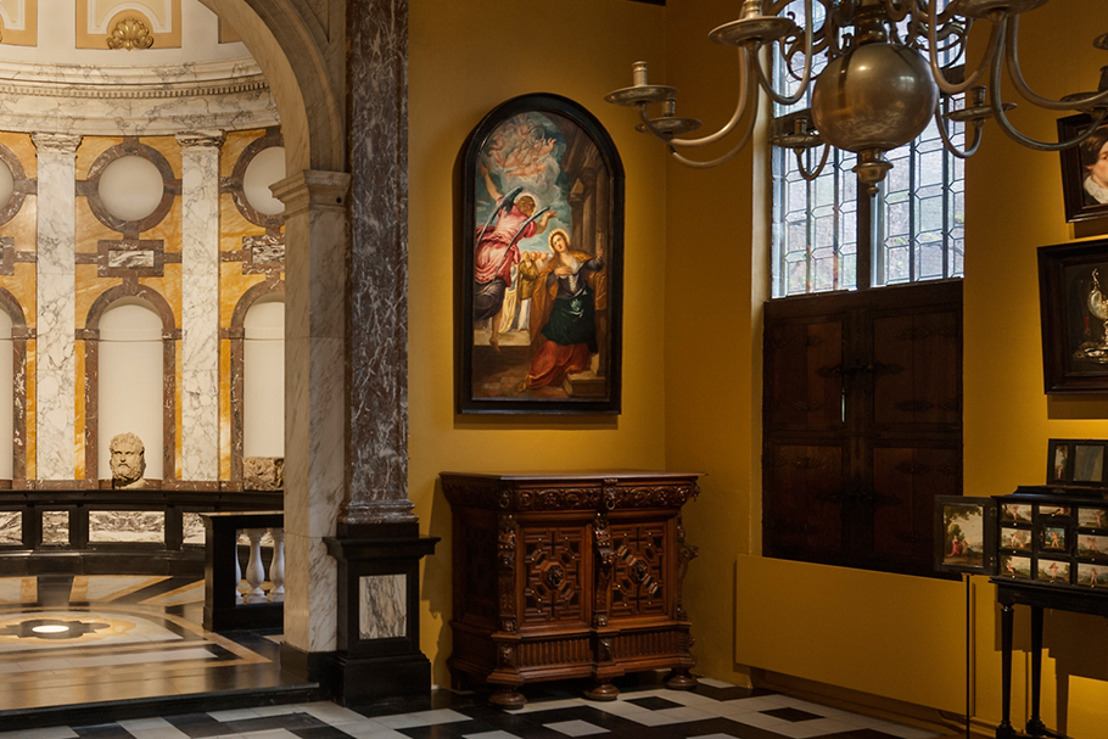 Tintoretto, seen by Rubens and Van Dyck and bought by Bowie

Tintoretto painted St Catherine around 1560–70 for San Geminiano on St Mark’s Square in Venice, a small but prestigious church designed by the architect Jacopo Sansovino, which was already famous in the Renaissance period for its exceptional interior with works by Giovanni Bellini, Paolo Veronese and Tintoretto. Rubens almost certainly saw the altarpiece there and his celebrated pupil Anthony van Dyck even sketched it in situ. Their Venetian counterpart was an important source of inspiration for both Rubens and Van Dyck, and Rubens continued to be influenced by Tintoretto’s inventions until the end of his career.

St Catherine remained in the church until it was demolished in 1807 during the Napoleonic period. It was briefly placed in the Galleria dell’Accademia, before disappearing into private ownership. David Bowie purchased the work 30 years ago from the London art dealer Colnaghi. The musician was so fascinated by the Venetian painter that he named his record label after him.

From Venice, via London, to ‘distinguished visitors’ in Antwerp.

As of today, the Rubens House is presenting the painting as a long-term loan – a policy the museum has been developing for some time now. The approach is not a new one elsewhere, but the Rubens House is playing a pioneering role in this regard in Belgium. Art donations are on the rise. The museum will use this long-term loan to supplement the story of its own collection, which is why its loans – its distinguished visitors – have been integrated in the permanent display. After almost ten years intensively pursuing this loan policy, the strategy is starting to bear fruit.

Until a few days ago, Bowie’s Tintoretto was located at the Royal Institute for Cultural Heritage (KIK-IRPA) in Brussels, where the altarpiece underwent technical examination on behalf of its owner, the Rubens House and the Colnaghi Foundation. Christina Currie’s expert team used radiography and infrared reflectography to reveal an exceptionally spontaneous and brilliantly executed underdrawing beneath the layers of paint. Not only does the research show how the painter developed his composition, its results help determine the attribution and date of the work. Comparison of the underdrawing with other examples from Tintoretto’s oeuvre allows the painting to be dated to a decade earlier than originally believed. The altarpiece’s underdrawing is almost identical to that of the princess in St George and the Dragon – a work by the same artist in the National Gallery in London. Another pleasing discovery was the way Tintoretto continued to adjust his composition throughout the painting process, as witnessed by the many pentimenti or painted corrections that were discovered. The study shows that the work was done entirely by the Venetian artist in person. The research will be resumed later this year, to investigate the passages of sky and architecture in more detail. The findings of the research will be published in the Bulletin of the Royal Institute for Cultural Heritage and the Colnaghi Studies Journal.

The independent Colnaghi Foundation promotes the work of old masters to a wide audience in a contemporary manner. The Foundation works with international researchers and experts, museums and collectors to show through a variety of media and channels how inspiring and exciting early art can be. The fact that the painting belonged for many years to the personal art collection of one of the biggest pop icons of all time demonstrates that the great innovators of our own time are more than happy to seek inspiration in historical art.

Tintoretto painted St Catherine for the altar of the Scuola di Santa Caterina in the Church of San Geminiano on St Mark’s Square in Venice, where it could be admired until the building was demolished in 1807. The altarpiece then disappeared into private ownership.

Since the announcement in November 2016 that the painting would be loaned long term to the Rubens House, Ben van Beneden has worked closely with the Colnaghi Foundation on a plan to return the altarpiece temporarily to Venice during the 2019 Biennale. When the Flemish Minister of Tourism, Ben Weyts, learned of the plan, he immediately decided to support it through Tourism Flanders. The painting will be the centrepiece of an exhibition in 2019 on the demolished Church of San Geminiano and the artworks it once housed. The show will also feature works containing famous views of the city by Antonio Canaletto and Francesco Guardi, in which the church can be seen on St Mark’s Square. Flemish masters too, such as Rubens, Van Dyck and Maerten de Vos, will be represented through temporary loans by our museums. It is hard to overstate the affinity between Flemish painters and Venetian art. The Flemings absorbed and assimilated the Italian legacy during their visits to the country and through the dissemination of Italian art in the form of prints. Several Venetian works from Flemish museums, including the Royal Museum of Fine Arts in Antwerp, will also return to the city of the Doges for the exhibition in 2019. Minister Weyts is enthusiastic about the temporary return to Venice of Tintoretto’s altarpiece: ‘This project is not only an excellent reason to share Tintoretto’s work with the people of Venice during the 2019 Biennale, it is also a unique opportunity to show our Flemish masters to the world in the place where –more than any other – they drew inspiration from their Italian colleagues and from the classical legacy. I sincerely hope that the project will raise awareness of the unbelievable artistic quality of our heritage and will inspire an international public to come and admire it in Flanders.’

You will find this story in the ‘Distinguished Guests’ tour in the free Antwerp Museum app.

Discover David Bowie’s Tintoretto and the other loans with their surprising stories during a tour for groups and/or individuals.

Museum Night at the Rubens House on Saturday 5 August will be David Bowie all the way, with lots of great music! Info at www.rubenshuis.be – tickets at www.museumnacht.be

David Bowie’s Tintoretto: Angel Foretelling Saint Catherine of Alexandria of her Martyrdom (Colnaghi Foundation) will be presented at Frieze London (5–8 October 2017). The publication will also be presented later that month at the Rubens House in Antwerp. Further information will be provided to the press in due course.