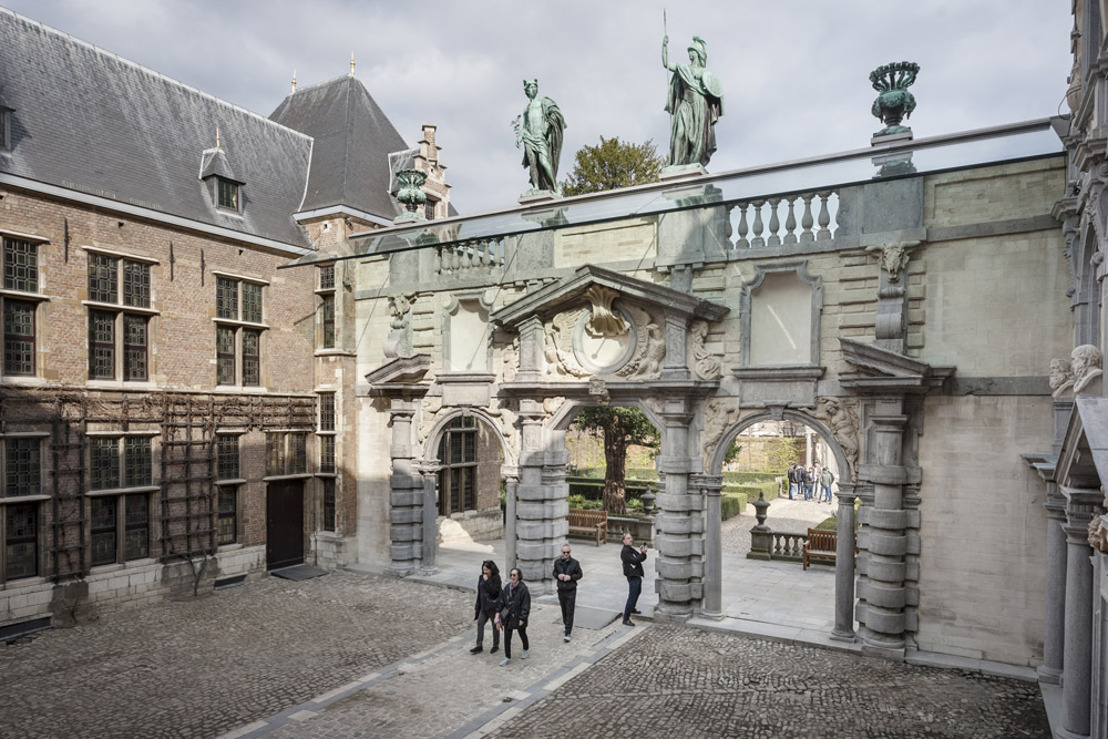 Rubens’s city palace made an overwhelming impression on his contemporaries. Antwerp’s municipal secretary declared in 1620 that ‘His home will arouse the amazement of foreigners and the admiration of travellers’. The monumental portico and the garden pavilion began to appear in paintings by the likes of Anthony van Dyck and Jacob Jordaens shortly after they were completed. Rubens himself frequently used the structures as settings for his own paintings too.

In September 2017, scaffolding was installed around the portico and garden pavilion at the Rubens House to allow the conservation and restoration work to be carried out. This was preceded by in-depth research by experts, who had been studying the two architectural elements since the 1990s. It did not take long to realize that they were in a poor condition due to the effects of the weather, and so urgent interim measures were taken, such as installing a temporary wooden roof above the portico. The condition of the portico was studied and monitored closely from that moment on.

In 2012, several experts from the heritage sector were brought together in a steering committee to explore the options for restoration. Studies and restoration trials were carried out, following which the specialists opted for a combination of protective and conservation measures. The goal was to conserve and restore the structures, while preserving the maximum amount of material and enhancing their visual legibility. Missing parts of sculptures would not be replaced and structural improvements would only be carried out where strictly necessary for conservation. Despite a loss of form and wear and tear, the portico and pavilion remained sufficiently legible.

The Flemish Community approved the project specifications and restoration began on 18 September 2017. The temporary roof was dismantled and the bronze vases and the statues of Mercury and Minerva were removed so cleaning could commence. A team of four specialist stone restorers meticulously tackled the sculpted elements, spending a year treating one flaking stone after another. The garden pavilion is now a harmonious ensemble again of light-coloured plasterwork and sandstone and darker blue stone. The portico, with its different types of stone, has regained its grandeur. The final stage was to install the glass structure that will protect the portico against precipitation and prevent further loss of form and contamination. A giant crane lifted the various parts of the construction one by one over the museum façade from the Wapper, resulting in some spectacular images. The canopy itself was assembled in the museum courtyard. The 30-tonne construction comprises a canopy made of triple-laminated glass sheets 6 cm thick, which are held in place by stainless steel frames, weighed down by lead across their entire length and anchored in the columns. The bronze statues and vases stand on top of the canopy.

After a year and a half, the restoration is complete. Visitors can now enter Rubens’s home again in the way he intended: with a spectacular view of the portico and garden pavilion.